May 15: Venerable Pachomius the Great 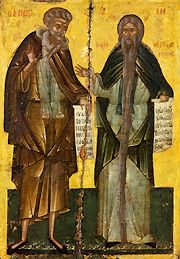 Pachomius was born in Egypt and was a pagan in his youth. As a soldier, he fought alongside Emperor Constantine in battle against Maxentius. After that, he learned of the One God from Christians and, witnessing their devout life, he was baptized. He withdrew to the Thebaid desert, to the famous ascetic Palamon, with whom he practiced the ascetic life for ten years. Then, at a place called Tabennisi, an angel appeared to him in the robes of a schemamonk and gave him a board upon which was written the rule for a cenobitic monastery. The angel ordered him to establish such a monastery in that place, prophesying to him that to this monastery many monks would come for the sake of the salvation of their souls. Heeding the angel of God, Pachomius began to build many cells, even though no one was at that place except his brother John and himself. When his brother reproached him for building unnecessary cells, Pachomius simply said to him that he was following the command of God without regard as to who would come to live there and when. Soon many men, moved by the Spirit of God, gathered at that place and began to live a life of asceticism according to the Rule of Pachomius, which he had received from the angel. As the number of monks increased Pachomius gradually established six more monasteries. The number of his disciples amounted to about seven thousand. St. Anthony is considered to be the founder of the eremitic life; and St. Pachomius, of the monastic, cenobitic way of life. The humility, love of labor, and abstinence of this Holy Father were and remain rare examples for imitation by a vast number of monks. St. Pachomius worked numerous miracles, but he also endured numerous temptations from demons as well as from men. He served men as both a father and a brother. He inspired many to follow the path to salvation and directed many on the path to truth. He was and remains a great light of the Church and a great witness to the truth and righteousness of Christ. He died peacefully in the year 348 in the seventy-fourth year of his earthly life. The Church has included many of his disciples in the ranks of the saints, such as: Theodore, Job, Paphnutius, Pecusius, Athenodorus, Eponichus, Sorus, Psois, Dionysius, Psentaesis and others.

Source: St. Nikolai Velimirovic, The Prologue of Ohrid – Volume One.

Thou didst prove a chief pastor of the Chief Shepherd, Christ, guiding the flocks of monastics unto the heavenly fold, whence thou learntest of the habit and the way of life that doth befit ascetic ranks; having taught this to thy monks, thou now dancest and rejoicest with them in heavenly dwellings, O great Pachomius, our Father and guide.